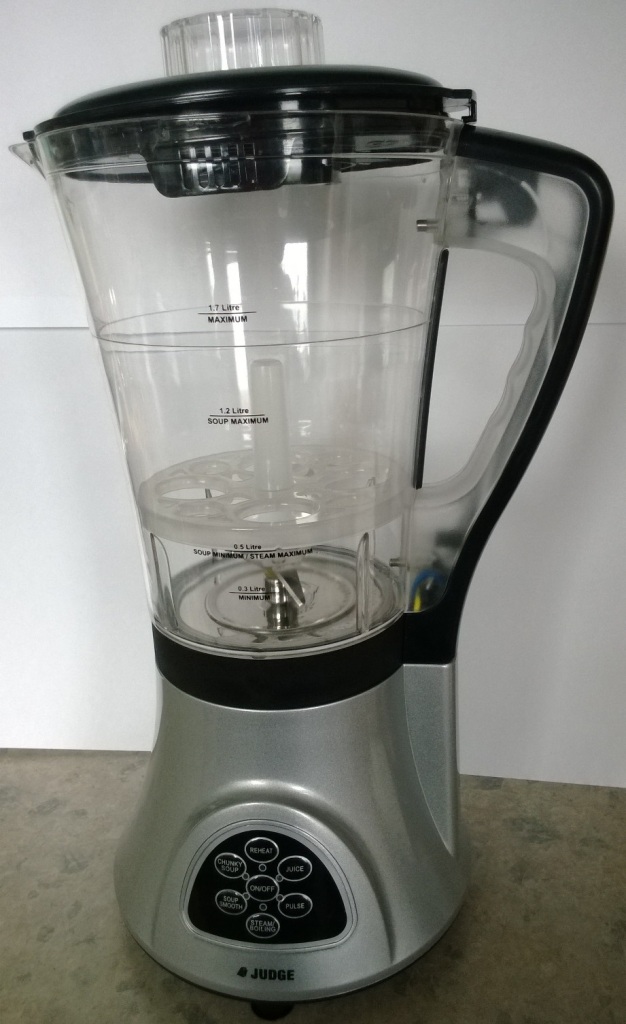 It doesn’t seem long since summer was here, and we were enjoying the joys of warm weather and light nights. But already it’s November now, we’ve fallen back an hour, and the weather is decidedly cooler. It is the ideal time to warm up with hearty soup.

There is something rather cosy about soup that fits with the coming of winter so well. I’m not adverse to the convenience soups that come in packets and tins, they are quick and easy, but I always prefer a pan of some random homemade soup that is determined by whatever I have in the fridge and cupboard.
When I was offered a Judge Cookware soup maker to test run, I was rather interested to see how this would work, cope and fit with daily life in The Jen household.

We’re a family of five, sometimes six. All involved in our own worlds, with different time schedules and different feeding needs. Quite often there is a need for something quick and easy. As a mother I would prefer that to be healthier.

With this in mind, let me introduce you to The Judge Cookware soup maker. The soup maker can make soup, milkshakes, hot drinks, coolers, boil eggs and more. The 1.7 litre capacity jug sits on its base, much like a traditional blender. With stainless steel blades and removable lid.

In order to give the soup maker a test run, I decided to try out a few different ideas, and compare to how I would usually make them.

Neets was more than happy to try out milkshake with me. And here is what she did.

It was really easy to make, and something either of the girls can just get on with if they so feel. Lucy prefers chocolate or vanilla, made easy with simply just adding vanilla icecream, or for chocolate a spoon of hot chocolate powder. Flavoured syrups can add any taste you so wish.

I much prefer coffee frappe. An iced coffee drink.

Again, so very easy and came out just as husband and I like. Lovely.

I have always used my standard blender for these types of drinks, so it was time to find out more about the soup maker. Time to try making soup.

A usual type of soup for me is to find vegetables in the fridge, throw them in a pan and cook. Depending on how I want it, depends on whether I need to blend it. In actual fact, I prefer chunky soup and husband likes smooth soups. The Judge soup maker has different settings for soup, a chunky and a smooth. So first test was to make chunky vegetable soup.

The result was a delicious vegetable soup in so very little time. Something I could have done in a pan perhaps. However, I didn’t have to watch the pan, and go back once it was boiling to stop it spilling over, and I didn’t have to transfer to a separate blender. All very convenient when looking after a two year old Jasper. Nothing worse than running back and forth to the kitchen while trying to do something else. So the convenience was great and the soup very tasty. Certainly got husband’s approval. 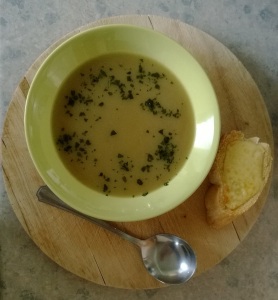 The method is very simple; You prepare the vegetables, add stock, put the lid on and set it to the desired programme. The soup maker then heats the soup to boiling, cooks for the set time (20-30 minutes max) and depending on the programme selected, pulses and blends.

Our “chunky” soup however didn’t quite come out chunky, and I was left wondering if I had done something wrong. When I think of chunky, I think of big chunks, with the vegetables actually still in the lumps they were cut in. The “Chunky soup” programme did not do this. The soup was rather smooth considering. With this in mind I set out to test run the same ingredients with the “Smooth soup” programme and then the simply boil function to compare. What I discovered is that the chunky soup programme doesn’t blend as long, so whereas it’s not actually chunky as such, it’s a little rougher than the smooth. For my preferred actual chunks, the boil function is the one to use. 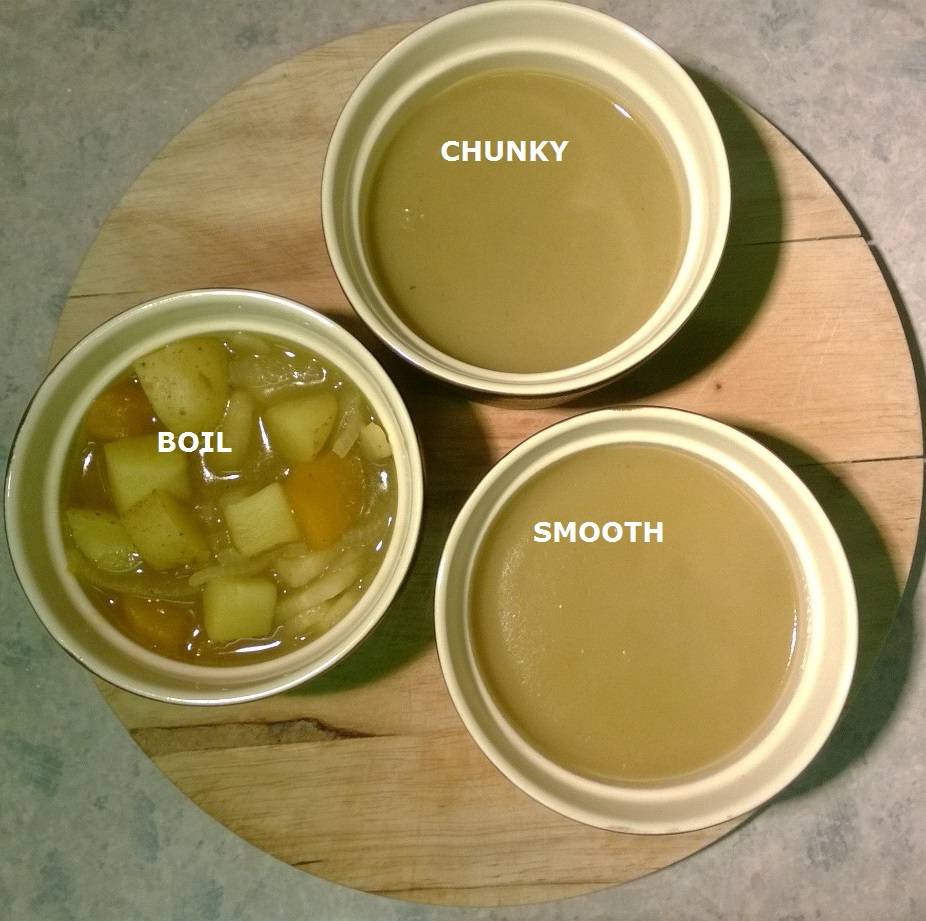 A favourite soup of mine is carrot and coriander. Cheap, wholesome and quick. I gave it a test run in the soup maker.


Really great. Really quick. The soup was ready in 20 minutes after preparation. Blended and all ready to go. It also kept hot for a considerable amount of time, and if I so wished, I can reheat the soup with the “reheat” function.

Another programme you can take advantage of is boiling eggs. An easy enough thing to do in a pan again, but why not use the soup maker. It is convenient, easy, and clean to do. What I was most interested in was whether the eggs would crack. A bugbear of mine when hard boiling eggs. My Mum always used to prick her eggs, she even had a little gadget to do so. I’m afraid I don’t do this, and nor do I have the gadget, so my eggs often crack. It’s just something I have issue with personally.

To boil an egg in the soup maker, simply add the minimal amount of water to boil, put the eggs in the holder and set to the boil programme. Leave for the time you wish and switch off. So easy. The eggs are more steamed than boiled. And no, they don’t crack. Excellent! 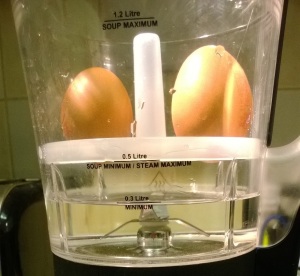 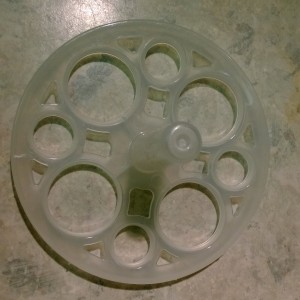 Through trying out these few test runs, I’d discovered the soup maker is capable of several functions. With using the soup maker for each of them, I’d avoided pans, a separate blender and cracked eggs. I also found it easier to just switch on and let it do its work, rather than watching a pan.

Like anything you cook with cleaning is never the fun part. After using the soup maker for milkshakes, we rinsed the jug with warm water, then put a little washing up liquid in and pulsed the blades a little. I then wiped down the inside and outside with a sponge. Nothing too difficult.

After making soup that was blended I discovered it had stuck to the bottom of the jug, which scrubbed off with the supplied cleaning brush. It was perhaps a little inconvenient, but not impossible. The downside is that due to the jug having the blades attached and it all being sealed, the jug cannot be submerged at all. You must keep the bottom of the jug out of water.

I also found the silicone seal ring in the bottom of the jug has stained quickly with using cumin and carrots. I was a little concerned with this if we are going to use the jug for cold drinks as well. But an easy solution as recommended the in booklet that comes with the soup maker is to put some lemon juice in the jug and put on the boil function. This actually worked well and there was no tainting or after effect.

What it can do: Make smooth or chunky soup in as little as 20 minutes. Good for milkshakes, smoothies, coolers, and frappe. Also good for hot milk drinks. Blending sauces and baby foods. No hassle, no pan watching.

There are a few limitations to what you can cook, such as cream, and flour and starch products. They shouldn’t be added during cooking. But can be added at the end and the pulse function would be used to mix thoroughly.

Another point to make is that the soup maker cannot cook meat in soup. Any meat must be cooked previously and added at the end.

After a good two weeks of testing and trying, my own opinion is that the Judge soup maker is a convenient and helpful addition to the kitchen. I would find it useful for days when I’m really busy, and want a quick and filling soup meal. It could be useful for the days when everyone is needing feeding at different times of the day. It’s great for milky drinks as and when you feel like them. It is safe and easy enough for any one of the family, asides Jasper of course, to use without any hassle.

It does take up bench space like any kitchen appliance, but it could easily replace the space of the original blender.

The amount of soup it can make is enough for four large bowls.

My eldest son is currently away at University. I couldn’t help but consider that this soup maker would be ideal for him. It doesn’t take up a lot of space and it would be something he could use easily and quickly. He often comes in late from a day of studying, and it is all too easy to just get some toast and tea. I’d much prefer it if he could throw some veggies in, leave it to cook and enjoy food that has more nutrition than toast.

The soup maker is very user friendly. With clear instructions in the manual that comes with the appliance, and helpful tips. The soup maker has a series of beeps to inform you of what it is doing, which helps if you’re in a different room. There is also a suggested recipe booklet in the box.

So easy to use and no fuss. The only inconvenience is perhaps if it gets stuck on food on the inside of the bottom of the jug. Great for quick and easy soup meals, or delicious drinks.

Priced in the region of £70-£80 it’s not a cheap convenience, however I do feel the value is in what it can do for you. In comparison to other soup makers on the market, it is an average price to be paying.

All opinions are our own. Thank you to Judge for the soup maker.