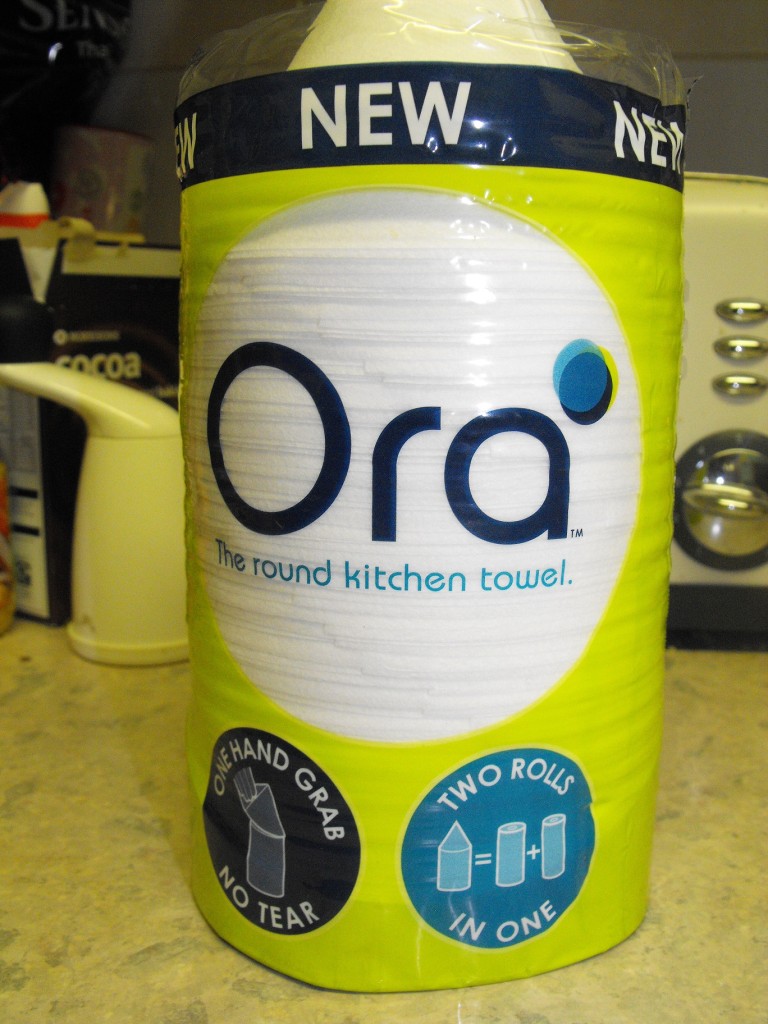 Before you wander off, believe me when I tell you you’re going to want to know more.

Firstly Ora doesn’t even look like your standard kitchen towel on a roll. It’s cone shaped. Ora claims to be more effective, economical and environmentally friendly. How is that?

The towels are stacked individually in a cone shape, which means they take up less room. It’s like two rolls in one. Good for me in particular as I kitchen is never big enough. Unlike other types of kitchen towels, the sheets aren’t on a continuous roll with perforations. This means that you only take one sheet at a time. I know I am guilty of taking more than one from a roll when I grab some.

I was glad to find that one sheet of Ora does do the job, and does it well. The sheets are circular and are more like cloth than paper. I found them very absorbent and they don’t break up when wet. I use kitchen towels a lot. I use them to clean the high chair, to wipe out the steriliser, to wipe down the kitchen benches and cupboards, on the cooker, as well as many other jobs.

Yesterday I really put Ora to the test. I found out our windowsills have suffered with the change in weather, and the condensation had developed a kind of mould. It was yucky. But I went armed with Ora to wipe them down before washing, and to my relief, it worked great. The type I usually buy would have broken up and I would have had to use a lot. I used one sheet per window with Ora. Great stuff.

Are you impressed yet?

The structure of a stack of Ora means that you can grab a sheet with one hand. Good when you have wet hands. Certainly helpful.

Twice the number of sheets on an Ora cone means fewer shopping trips, better value for money, and less space taken up. The reduction in packaging of 20%, in turn leads to less room in transport. 30%, which is rather significant. A help in reducing pollution and congestion.

With just one everyday product and one simple idea, Ora has made an impact both in the home and out of it too. What’s not to like?

I’ve certainly been converted. I really recommend at least trying them out. At a reasonable cost of £1.89 for a standard pack and £1.00 for the compact cone, it’s worth a try.

Helen mentions Ora on Fuss Free Flavours, and comments “the towels are circular rather than square which I am sure means that those who are craftier than I am will come up with something pretty to do with them too.”

My husband proved this today, as I found him in the kitchen earlier with one on his head! Yes, crafty I’m sure.

Appearance 10/10 The new look Ora have used is neat and tidy, and quite funky.

Convenience 10/10 Love that fact that you can take one sheet at a time without having to tear along perforations. The sheets are great and very useful. I find them much better than standard paper sheets.

Thank you to Tesco for the Ora sample.