No sooner than Halloween was over and we have been bombarded with Christmas, be it in shops, internet or the TV. I’m not at all adverse to Christmas and most of what comes with it, but I do struggle to feel any kind of Yuletide spirit until it is actually part way through December. However the subject of Christmas shopping starts to poke you during this run up. Particularly if you have many people to think of, and budgeting. Ideally I’d love to go out in the week before Christmas and just do the lot in one go. I must be quite mad to consider this sane, but it reminds me of my own Father who would go out on Christmas eve to our local shops and do all his shopping in one go. He always bought wonderful and thoughtful gifts.

That just isn’t possible with all things considered in the world of Fuss Free Jen. So I started to get together ideas, subtly asking the girls what they would need or like. I took notice of the dreadful TV adverts. I went so far as to make a few lists myself, not that I think the magical Father Christmas will be much help when it comes to any of this. (I wish).

I like to be thoughtful, and I like Christmas to be a surprise. None of this give me a list and I’ll get it malarkey. I like to get an idea, so that I know the type of things the children are wishing for. My girls are now 16 and just about to turn 14 years. It is getting to be a most awkward age. Past the point of toys, and really not wanting more clutter in their shared room. They already have the basic technology most teenagers seem to have these days. With this in mind, it is somewhat a rather complicated business to find suitable and affordable gifts for the girls. I’m working on it.

Jasper is a different matter altogether. That wonderful age of two years and ten months. So much to learn, so much energy. There is a huge market out there for this age. But on the other hand, what does he actually need? I’ve seen countless TV adverts now bursting with enthusiastic ideas for children’s gifts. Action figures that do this and that, trains, planes and automobiles, animals and dolls, characters from TV shows, from films, arts and crafts, the list is possibly endless. I find much of what is advertised rather unimpressive or indeed alarming.

For example I keep seeing an odd looking character, that looks a little monster like, and appears to have a bogey coming out of it’s nose. No thank you. I was also rather disturbed to see a tablet designed for Jasper’s age, made by a very well know company. Afraid I don’t want Jasper glued to a screen and learning this way. Modern technology is already worrying me that learning is leaning that way so much, I feel that giving this to a child that is absorbing the world about them is just cause for concern. But that is another story.

Jasper already has many toys, so where do I go from here?

My husband recently commented that he feels we need a pruning of the toys. That perhaps Jasper has outgrown some of them. I tend to agree, but am perplexed as to what to get rid of. Jasper tends to play with all his toys, regardless of the age range. For example, he has a toy that has ball runways on it, and it makes animal noises. He got it for Christmas when he was less than a year old. Jasper now uses this with all manner of other accessories, and it becomes something else entirely different in Jasper’s world. Some days it is a volcano, other days a roundabout, or it has even been a rocket ship. 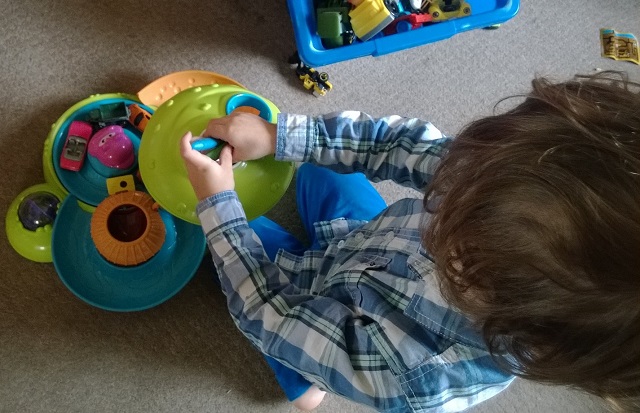 Another favourite of his toys is a cardboard box. Depending on what has been delivered recently, depends on the size and shape of said box. But regardless, he finds a use for it. His current box came with a soup maker inside it, yet to him it has become a ship, a space rocket and a car. Just the other night, he loaded it up with his toy cars and sailed it across the floor (along with the seedling tray he has hijacked). 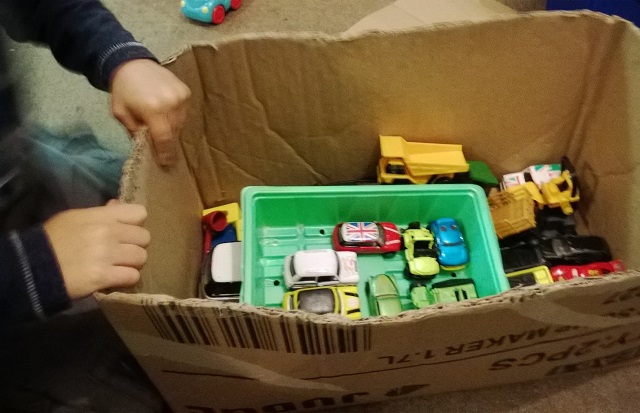 Then there is the laundry basket. A regular form of entertainment for Jasper. He takes Bill Bear in it, he carries his cars about in it, he sits in it, drives it, and generally has mini adventures in it. 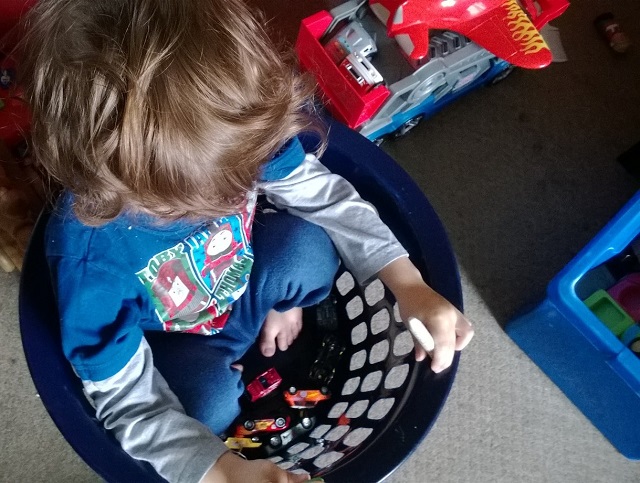 I am therefore left wondering something. Does Jasper really need a new array of toys? Maybe I need to consider carefully just what his needs are, and pay less attention to what is pushed in my face through the adverts and the must haves.

I’ve certainly thought more recently that Christmas time is not all about buy buy buy, and my children won’t be getting everything on their lists. It doesn’t mean I’m going to be unkind, it just means I need to think a lot more about their needs and fulfil them as best I can.

Previous Post: « Countdown to Christmas with a Hobbycraft Advent truck
Next Post: It was about time for a nicer dinner »