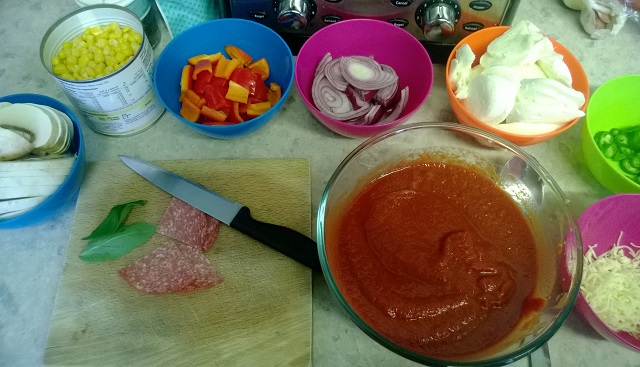 Our meal times can be quite hectic and hurried, and usually involve me rushing about the kitchen throwing food in general directions to create something that we can consume. We have few days that we can relax and be social. So it is nice to sometimes take a step back and just make dinner to actually just enjoy it.

As a family we came up with the idea that we’d take turns in making each other dinners. It’s a nice way to get everyone involved, and get the children experienced in the fine art of family eating. It also gave them a chance to decide on what to make, and if so wished, get creative. Our first meal was chosen by Neets. So here is what she decided on, made and served us.

The menu read as:

To make the pizza base Neets used a recipe I use. It’s something I literally just throw together, so giving measurements would be difficult. Neets was making individual pizza’s for us, so for each base she used the following: A cup of self raising flour, a pinch of salt, a dessert spoon of olive oil, and water to mix together.

Mix the dry ingredients, add the oil, mix in to the flour, then add cold water gradually to form a dough. You don’t want it sticky, you want to be able to knead the dough and handle it. 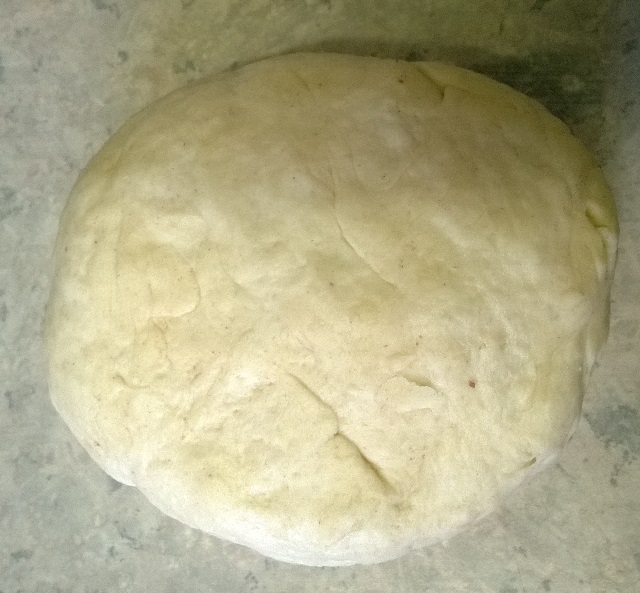 Once the dough is just right, have fun kneading it and getting it lovely and smooth, so no cracks form. Roll it in to a ball, then press down on a floured surface. We don’t use a rolling pin, we just man handle the dough in to the right thickness and size by applying pressure and pushing it about.

Throw it on to a floured baking tray, and push it about some more to make sure its not too thick anywhere. Then pop in the oven on a medium heat, for approximately 10 minutes until it is golden brown. Bring it out to get it fully dressed. 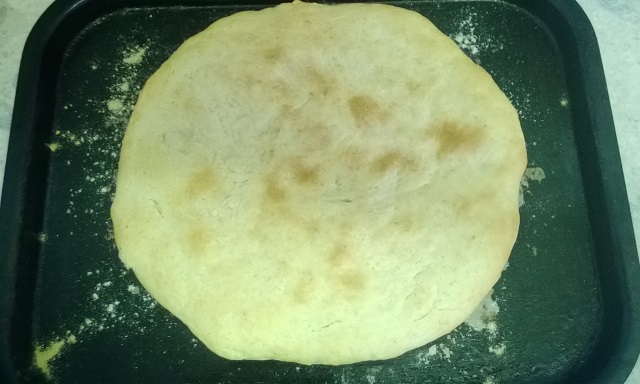 The next part is its underwear. We make a very basic tomato sauce, using passata, a dash of tomato puree and some crushed garlic. Mix well. Then spoon some on to the base you’ve prepared, and spread about with the back of the spoon so it is relatively even. 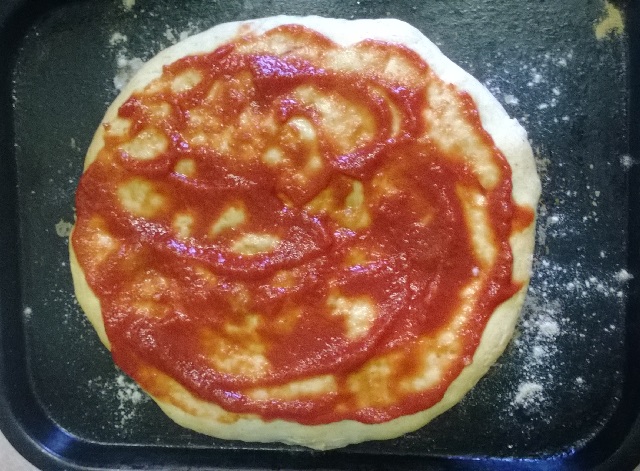 Here’s the fancy bit. Neets was making “designer pizza’s”, which meant she was making them to order with any ingredients we wanted from a selection she had prepared.

She then added bits and pieces of the required toppings to the base. 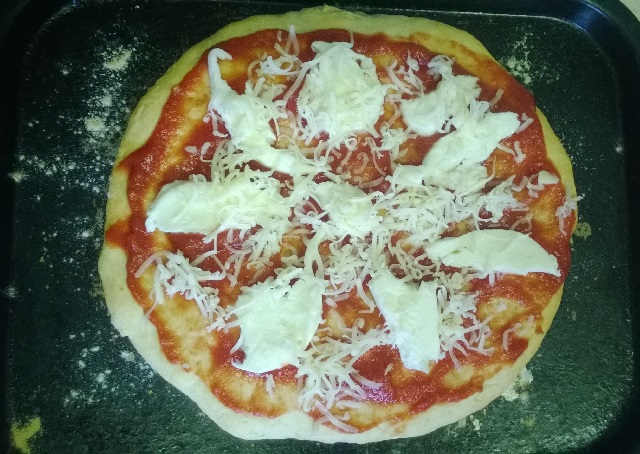 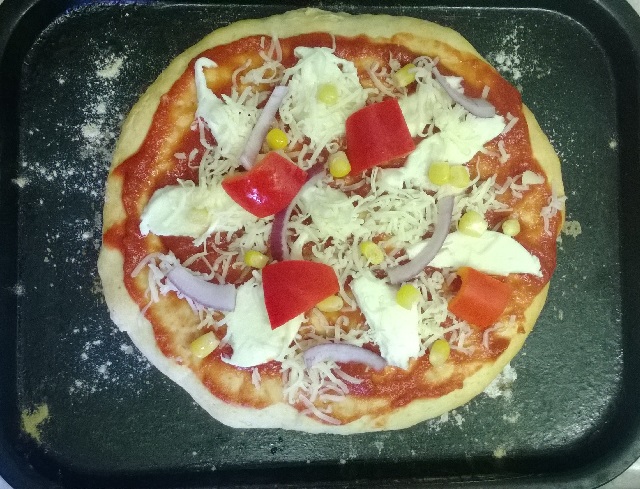 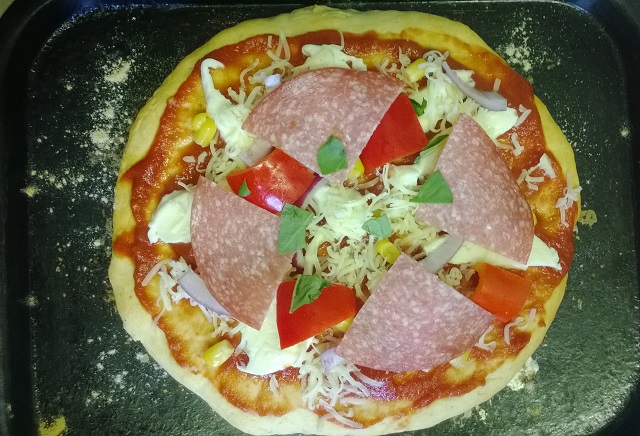 Then salami and a few torn basil leaves.

Popped back in the oven until the cheese was melted and slightly golden, making sure that the crusts weren’t singed. 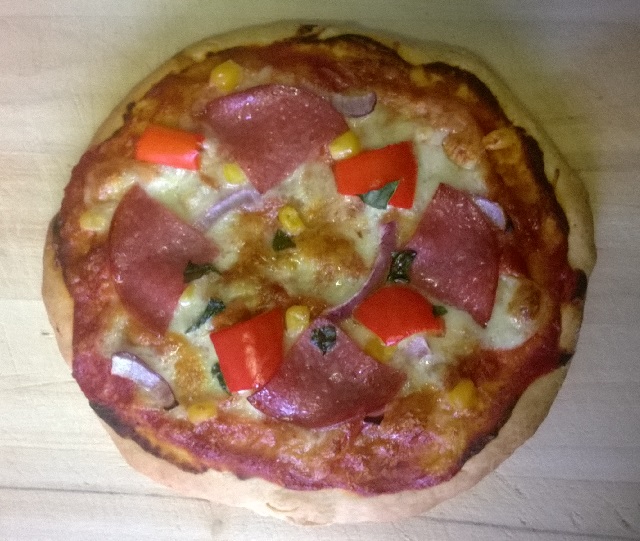 For the sundaes, Neets took plastic drinking glasses, broke up some chocolate crunch biscuits and placed them in the bottom of each glass. 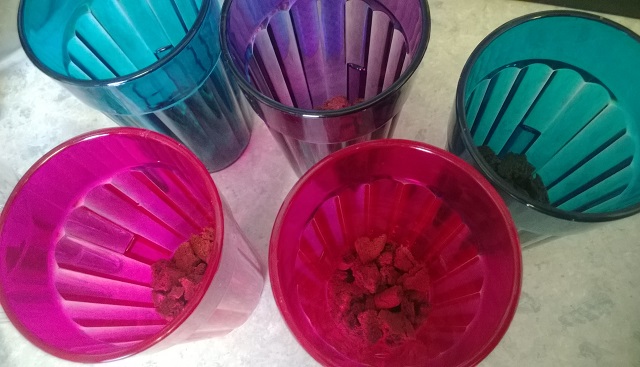 Next, Neets added a layer of chocolate whip. The kind you make with powder and milk. Then broke up some chocolate flakes and made a layer in each glass. 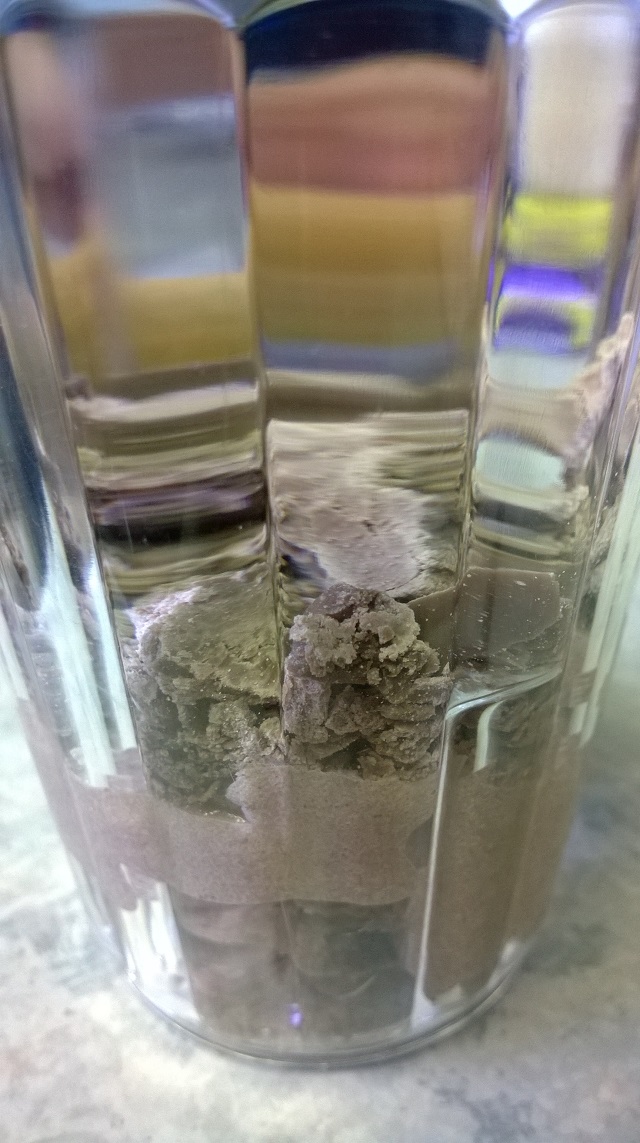 After this, Neets layered chocolate and then vanilla icecream to almost the top of the glass. Finally on top was cream, decorated with sprinkles and a chocolate dipped strawberry (which she had prepared earlier in the day and chilled).

She also made her own decoration from wooden skewers, and foil strips (the kind you’d decorate a Christmas tree with). 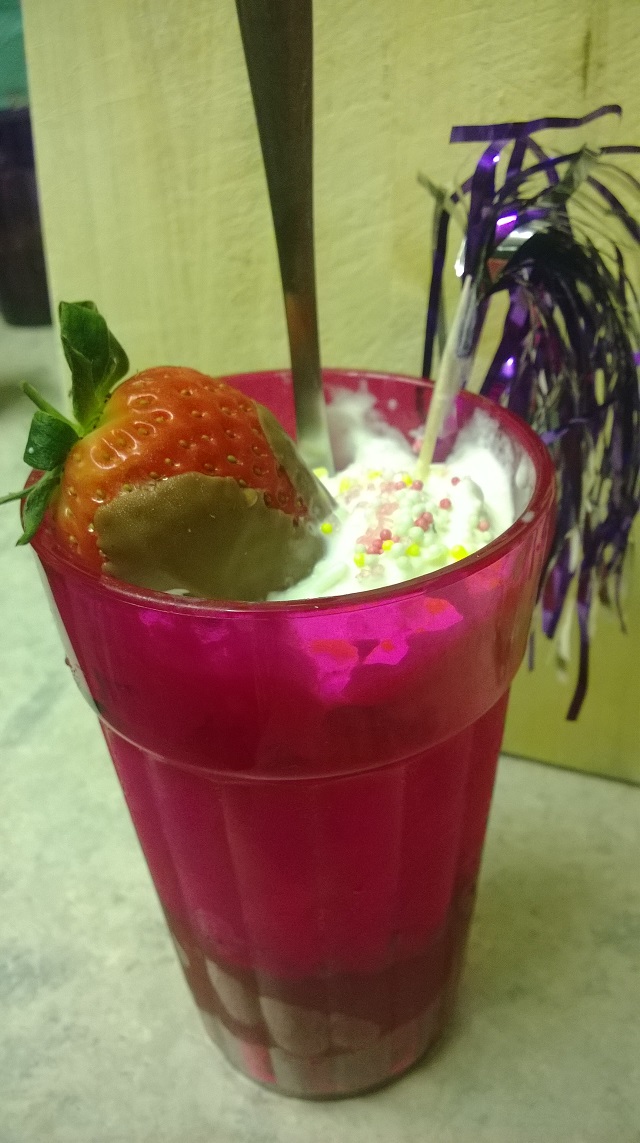 And there we have it, Neets very own dinner, thought of by herself, made by herself, and eaten by all. She even made me a tomato free pizza, which was fab (I had mushroom sauce instead).

Everyone enjoyed it, and we were delighted to have a happy meal time together. Ten out of ten for Neets (aged 15 and a half).