It would be lovely to have a tranquil Sunday and relax, but unfortunately I feel the need to play catch up. If not today, it will only be waiting for me tomorrow. The last week or more has been busy busy, with just stuff going on that eats up my time. Had a timetable of events that needing ticking off one by one. Now I can almost come back to ground level and feel a little more human.

So firstly, I apologise to those people that I have kept waiting. For those expecting to hear from me before now, for anyone that I have had to put on hold.

All my good intentions and plans went astray. Every time I planned my day, the end result would be entirely different. Hasn’t helped that I have been suffering the 32nd week joys of pregnancy, from back ache, aching legs, insomnia, appointments and general lack of energy, to name just a few.

We got the tree up last weekend, which was worth it. The children love it and I felt it was important. 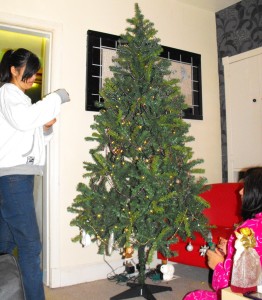 The girls just starting the tree.

The finished tree, in all its many decorations

Yesterday was a busy day for me. I woke at around 3.30am, and struggled to get back to sleep. I eventually got up at about 4.15. I filled in some time, then the children woke at 5.15am. They all came downstairs in various states of “what time of day do you call this”. But nonetheless they all got up, which I was very glad of. We were ready to go by 6.10, and a taxi collected us at 6.15. Took us to the train station. It was icy and cold, and dark and no one was about. The station was empty too, although the lights were on. We waited 20 minutes for our train and off we went.

It was rather nice to be on a train with no other noise, no fuss, just us and one other couple. It stayed quiet for another hour and a half perhaps, then as we travelled down the country the noise built up and chaos ensued. A whole variety of people going to a whole variety of places, some quiet, some noisy.

We reached our destination 20 minutes late, after about four hours on the train. This is the part I perhaps dread the most, I have to say goodbye to the children and walk away. I know it’s only for a few days, and I know they will be fine, but every time it’s always difficult.

My emotions were helped though by meeting a friend who lives down there, and we sat and had coffee and talked while I waited for my return train.

And then off I went, back North for another almost four hours. Homeward bound. The train was busy of course, and the toilets stank, of course. But it was quite interesting sitting taking in all this about me. I find it interesting to take in how people react, what is going on about me and the changes. Not being nosey, far from it, just pictures on faces and how other people are reacting.

The young girl who obviously takes time in getting herself ready, with just so hair and make up, who sat reading Marie Claire, but had this annoying tick that I’m not sure she even knows is going on. She would move her head, as if to roll her neck, as one does when we have a stiff neck. I thought that was what she was doing at first, but she kept doing it.

The man sitting listening to his ipod, tapping his foot, which happened to be on a hard plastic panel on the floor, so it was making a rather loud noise. I think he was unaware.

The group of at least fifteen men who you could hear coming before they got there. They arrived in our coach, like a caterpillar of shiny groomed men out strutting their stuff. Talking loudly and seemed in that excited boy mood. They were making a bee line for the back of the coach, where the catering trolley was parked. They were on the hunt for beer. Their sixth senses were on high alert, you could tell. They found it, and you could almost hear the joy in their elation. One by one they snaked through the coach, in a conga of beer thirty testosterone psyched male. They noticed they were walking through the quiet coach, and they said one by one “shhh”. It was amusing. Then they all squeezed into the gap at the end of the coach where the catering trolley was, and managed to close the door. I have no idea how they managed this. I would loved to have taken a photo. I bet they would have let me too. You could hear muffled talking going on, and a few minutes later, they all came out again, each one with a various beer in their hand. And off they went.

There were the groomed women too, at a different stage of the journey, unrelated to the men. A group of six women, all so well groomed. Their hair perfect and pinned just so, clothes obviously chosen specifically for that night, their tanned legs teetering on heels so high I fear they would need oxygen. They came tottering down the coach, with an air about them, only to find the end of the coach (where I happened to be sitting beside) was the end of the train. They about turned and tottered off back from whence they had come.

I wonder how many people noticed me.

Here I am again. It’s Sunday. It’s a lovely day. I have some catching up to do.